This Is Parkdale, Vol. 2, Issue 2: “Gentrification” is the Tip of the Iceberg

“GENTRIFICATION” IS THE TIP OF THE ICEBERG

It seems like everyone nowadays is talking about ‘gentrification’ in the neigh­bourhood, especially now that two condo towers are slated to go up at King and Duffer­in. Parkdale Organize agrees that gentrifica­tion is a real problem. We don’t necessarily agree with everyone about what gentrifica­tion is or what to do about it.

Gentrification in Parkdale is not sim­ply a condo or a Starbucks. It’s the day-to-day process of pushing tenants out of this neighbourhood so that landlords, business owners, developers and homeowners make more money. Rent increases, harassment, evictions, deportations, schools that ignore the needs of Parkdale’s kids and cutbacks to services that people in Parkdale depend on are the day-to-day ways that living in Park­dale is made more difficult for the people that are Parkdale.

In the coming months all sorts of people are going to argue that the solution to all of Parkdale’s problems can be found if we just follow them as they protest gentrification, run for election, petition on behalf of businesses or social services, or appeal to authorities higher than us.

People in Parkdale should ask them­selves who it is they need to be joining with and what they need to be fighting for. Are we organizing with our neighbours to build the trust and power needed to fight against the day-to-day problems that affect us? Or are we making a show of opposing a vague idea while our day-to-day struggles go ignored?

WE WILL ORGANIZE FOR OUR HOMES

Neighbours from King and Cowan, after demanding their landlord halt an eviction.

This neighbourhood is where we live. It’s our home. We may not own the land or the buildings but it’s still ours. Whether it’s a unit in a Metcap building or a rooming house, landlords continue to try and take our homes from us. Everyone feels the pres­sure from landlords trying to push us out through rent increases, disrepair, sell-offs or buy-outs, evictions, harassment, and even outright threats. But landords can feel pressure too.

One of the most common ways Park­dale is gentrified is by people simply being pushed out. One of the powerful things we can do is not move out. We can hold our ground and refuse to be abused, ignored, ripped off or intimidated but it is hard to do that on your own. It’s a whole lot easier and a whole lot more effective when you are sup­ported by your neighbours and organized in your neighbourhood.

This summer over 300 units in several Parkdale buildings withheld their rent for 3 months. They were fighting against rent in­creases and for repairs, and they won. The banners may have come down and the strike may be over but it’s important we not for­get what happened and what else can still happen in this neighbourhood. The rent strike wasn’t just about Metcap or even just about rent increases. It was about defend­ing our homes, and our neighbours from be­ing pushed out of our neighbourhood. This didn’t happen without organizing and it won’t happen in the future without more organizing.

Our neighbours continued Parkdale’s fight when they organized against their land­lord trying to push them out of their homes at Cowan and King to make way for a Dominos Pizza. The landlord folded and our neighbours saved their homes.

Our neighbours in two rooming houses on Dowling continue Parkdale’s fight as they organize against their landlord trying to evict them. That landlord also owns a coffee shop and restaurant in the neighbourhood and wants to use our neighbour’s address to store his luxury cars while renting to wealthier tenants.

The fight continues and the momentum is in our favour. Landlords feel pressure com­ing from us now. Our neighbours have a better idea of the strength that exists in this neighbour­hood. That power doesn’t come from nowhere. It’s built by us organizing together. The more people we do this with, the stronger we become. The stronger we become, the safer our homes are.

WE WILL ORGANIZE FOR OUR SCHOOLS 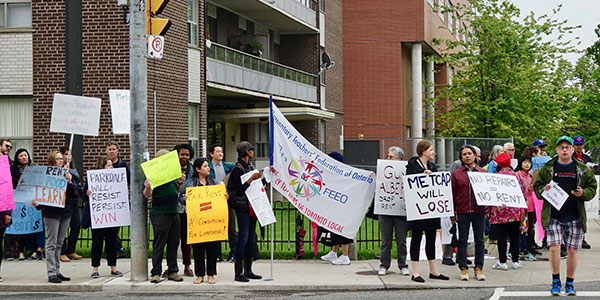 The Toronto District School Board has decided to cut the funding for the elemen­tary school at King and Jameson by $24,000. Why? Because Queen Vic ranked the 151st poorest school in the city and they decided to only give extra funding to 150 poor schools.In 2016, the TDSB gave extra funding to 154 schools in need. The cut off number is ar­bitrary but the decision to cut funding to Queen Vic is political.

Queen Vic’s rank has gone up every year. So, what’s going on? Do parents across Parkdale get big raises each year? Are OW and ODSP rates going up? Of course not. The TDSB has been sending more and more stu­dents in the “Gifted Program” from across the west side to Queen Vic. The families of kids in the gifted program make, on aver­age, over $113,000 a year. Their income is pushing up Queen Vic’s rank. What started as one 4th grade “gifted” class in 2009 has now become 20% of the whole school. To cut Queen Vic’s funding because of the presence of these students amounts simply to a fund­ing cut for Parkdale kids.

Funding cuts are going to make school harder for children in Parkdale. For these kids, school was already difficult enough. The schools in this neighbourhood were un­derfunded already. Our kids already had a hard time performing well. And these funding cuts will only make things worse.

The school board is more concerned with putting resources towards programs for kids from whiter and wealthier families than the working class and immigrant families of Tyndall, Jameson, and West Lodge that are the majority of Queen Victoria and Parkdale Pub­lic School. As school becomes harder for Park­dale’s kids and housing becomes harder for Parkdale’s families more and more of Parkdale will disappear.

The TDSB may think that we should just do fundraising in the neighbourhood to make up for their funding cut. We think this is non­sense. Our kids shouldn’t get a worse education because we make less money. We shouldn’t have to fundraise to fund our schools any more than we should have to fundraise to repair our build­ings or to pay rent increases to our landlords. Instead, we organize. Parents, kids, neighbours, and teachers in Parkdale can still do something about this. We can organize together to improve the conditions in our schools. Parkdale won’t abandon its kids.

Parkdale Organize will restart its tu­toring program on Friday, January 12th from 5-7pm. The program is free and open to kids 7-13 years old. The program is to be run by a Parent Committee, which also acts as a space for parents to organize around educa­tion issues in Parkdale. Email parkdaleorganize@gmail.com 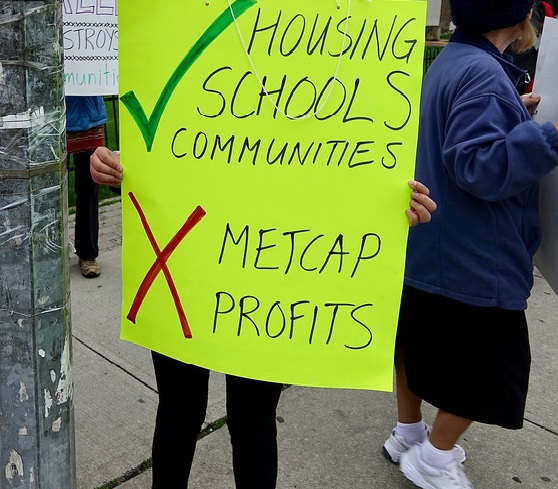 A student at Queen Victoria expresses support for the rent strikers.

WE PLAY CHESS, NOT CHECKERS.

We won’t be led from one crisis to the next and we won’t be convinced that if one bad thing happens it will destroy our neighbour­hood forever. Instead, we organize to fight the day-to-day struggles we’re faced with. We will build up our strength and abilities and we un­derstand that we need to prepare for crises before they come. That way, we are prepared and capable of responding to them.

The condos at King and Dufferin may be built but the sky isn’t falling. Working class people in Parkdale are continuing to organize. The strength, intelligence and courage needed in our daily lives is being pooled together to fight the day-to-day struggles we share. The struggle against gentrification is one that will be fought in our homes and schools. We’ll fight it together as an organized neighbour­hood in defense of our neighbours and for our neighbourhood. We aren’t struggling against an idea or for an “authentic” Parkdale. We are struggling to improve our lives and the lives of our neighbours, co-workers and kids.

Congratulations to our Neighbours

More of our neighbours working at the Ontario Food Terminal have won a strike for union recognition and against bad working conditions. Twenty-five Park­dale workers at Ippolito Produce Company won a guaranteed 40 hour work week from Monday to Friday and a wage increase. Like their fellow workers at Fresh Taste Produce before them they won by organizing and taking collective action, and again, their neighbours in Parkdale stood alongside them on the picket line. With so many of our neighbours work­ing at the Food Terminal, workers can orga­nize and build power against their bosses both on the job and in the neighbourhood. 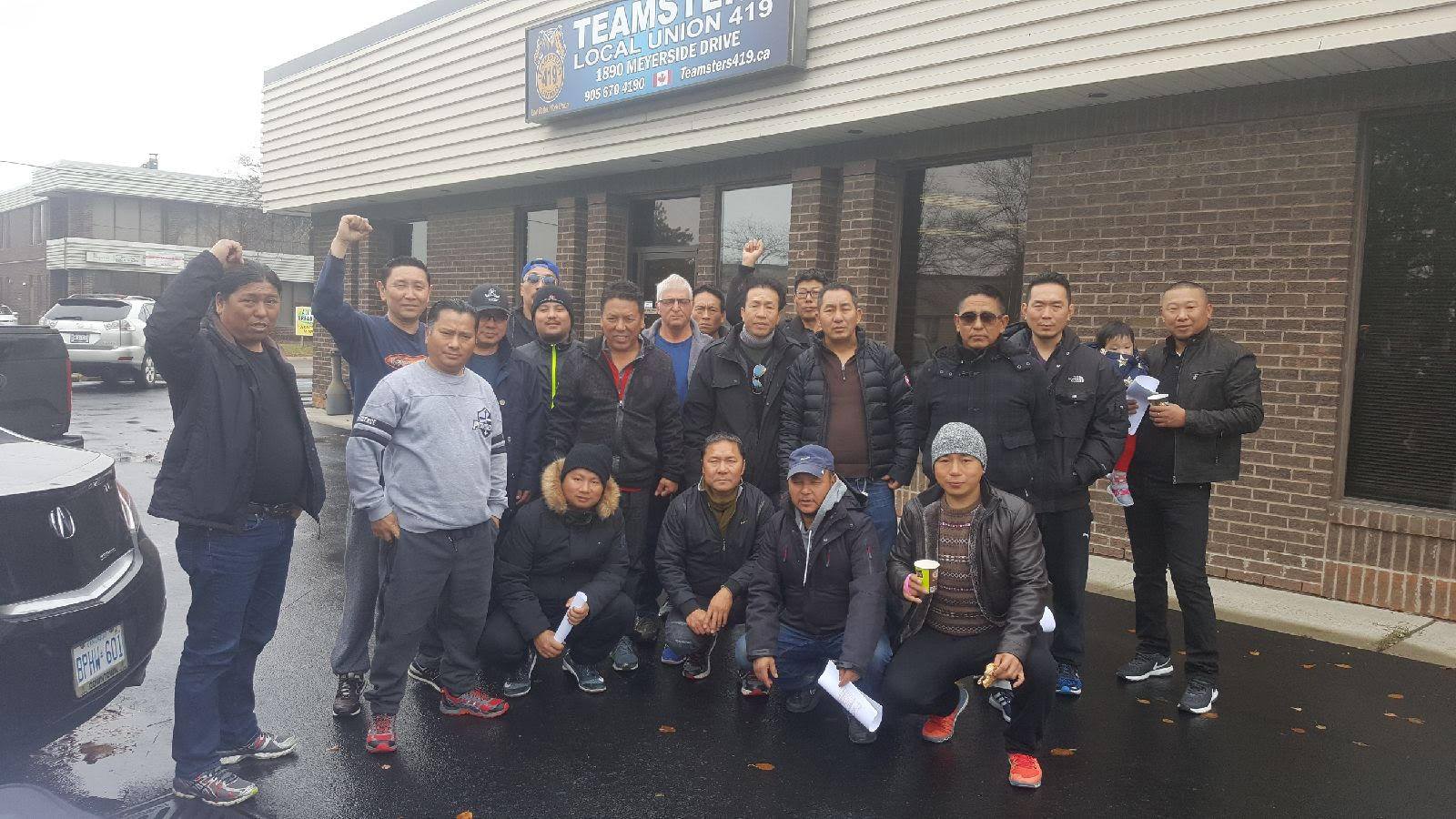 The workers, our neighbours, victorious!